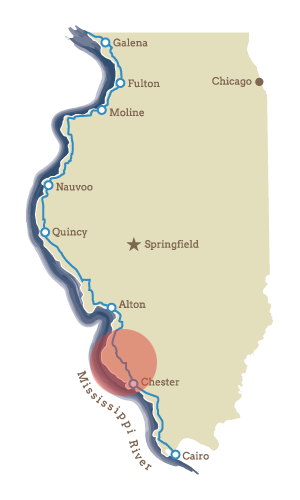 A Route 66 landmark for more than 30 years, a 30-degree turn in the middle of the bridge makes it one of the more interesting bridges in America. The bridge was named after a shoal, literally a chain of rocks, that made this segment of the river dangerous to navigate and completely impassible during low water. The bridge was originally intended to be straight, but the plan would have made for treacherous navigation near the Chain of Rocks pumping station and took the bridge over bedrock that wouldn't support the weight of the bridge. Today, the bridge is open only to bicycle and pedestrian traffic and connects to more than 300 miles of trails on both sides of the river. It is one of the world's longest bicycle/pedestrian bridges.