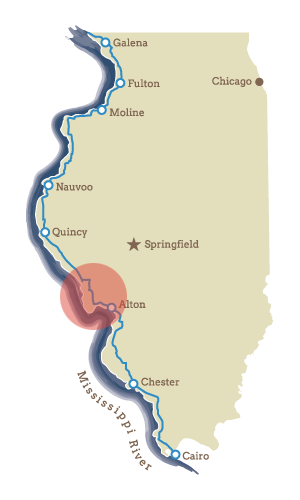 The Alton Prison opened in 1833 and was Illinois’ first state penitentiary. After it closed in 1860 it was reopened in 1962 as a federal military prison. The majority of the prisoners were Confederate soldiers, but also included people imprisoned for treasonable acts, such as making anti-Union statements or aiding an escaped Confederate, and guerillas imprisoned for acts against the government, such as bridge burning or railroad vandalism. The prison was home to 11,764 prisoners over three years. It was overcrowded and prisoners were malnourished and had inadequate clothing. This lead to widespread influenza, dysentery, and a small pox epidemic. Today a small portion of the wall, restored in 1973, can be visited at the site.